A brief history of the Parish
by George Dorrian 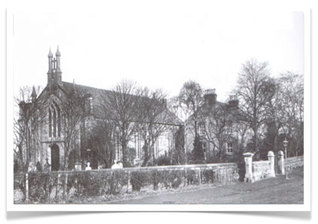 Saint John the Evangelist Parish, Prior Lane 1841
The origins of what is today the parish community of Saint John the Evangelist at Barrhead lie, not in the myth of religious refugees fleeing to Scotland in the aftermath of the so-called 'Battle of the Diamond'. In fact they fled to Mayo, and at a much later date some ended up in Barrhead as Famine refugees; hence 'Connacht Corner'. The origins lie rather in the prosaic fact of economic migration into the then rapidly developing industrial belt in the West of Scotland in the early 19th Century.

That many of these migrants were Irish is not surprising for links between Ulster and the West of Scotland were ancient and strong. But not all were Catholics, especially in the Paisley area, attracted as they were to the textile industry for which Barrhead in 1780 provided the first water-powered cotton mill on mainland Scotland. Some immigrants were Gaels, displaced from Lochaber and Argyll; Catholics among them.

The first Saint John the Evangelist Church was built in 1841 in Prior Park. Latterly the Columba Club was erected on the site. Not until the post-Famine era, (1846+) did vast numbers of Catholics flood into the west coast ports of Scotland, driven by necessity, and entitled as they were under the terms of the Act of Union of 1801. What the many Catholics among these waves of immigration faced in Scotland was a system of Church administration that had been developed in a post-Reformation Scotland, (i.e. post 1560) under a State code of anti-catholic penal laws, that even in the 19th century, and despite the friendly assistance of men such as David Dale, and the Emancipation Act of 1829, inhibited and circumscribed many aspects of Catholic life and practice. The leaders of this religious minority – in 1800 estimated at around 30,000, - were the Vicars Apostolic – bishops appointed by Rome to govern (in 1827) the three Districts: Northern, Western and Eastern. Renfrewshire came under the regime of the Western Vicar – Apostolic, Andrew Scott, assisted by Bishop John Murdoch. The few priests then available were mainly from the district around Fochabers – and the Western Isles. These were the front-line troops who faced invasion from Ireland whose citizens came to Scotland bringing few Irish clergy to assist them.

The 8 million population of Famine Ireland largely dispersed itself throughout the English-speaking world. In the process of this Diaspora an Irish Empire rivalling that of the British was established, as Archbishop Manning once remarked. Mr John Bremner (1798–1847) was from Fochabers, cousin of Bishop John Murdoch and neighbour of Andrew Scott – all present at the first Mass of Saint John's in 1841. From his base in Saint Mirin's – as parish priest he established two mission centres: Saint Fillan's Houston (where he invited his mother to reside) and Saint John's  Barrhead – each in 1841. He thus subdivided his own vast territory as later; Eaglesham (1856) and Neilston (1861) were to be hived off in turn from Saint John the Evangelist's jurisdiction. 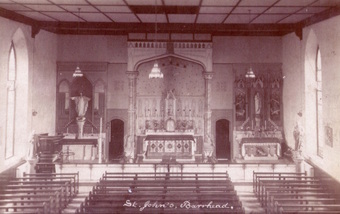 Interior of the original St John's
On the sudden death of John Bremner – (typhus contracted on a sick call) - James Purcell, one of the first Irish priests in the 19th Century to work in Scotland was left in charge of Saint John the Evangelist Parish. In his brief stay (1841-1845), he successfully opened the first school in Water Road, opened the old cemetery at Saint John the Evangelist (1842) and built the presbytery of Saint John the Evangelist. When Fr Purcell moved to Hamilton he was succeeded by Fr John Sheedy, from Fermoy, County Cork. His period was marked by the massive influx from Ireland that followed the Great Famine, and by the tragedy of the Victoria Pit explosion, where at Nitshill, 61 miners died; over half are buried in the old cemetery. John Sheedy (1845-1858) had a record number of baptisms in addition to these other calamities and the strain of coping affected his health; he retired to Glasgow – though he did not cut off his Barrhead contacts.

There followed, in the rest of the Century and beyond, a succession of mainly Irish priests. Most of these men were of outstanding ability and piety; a few less so. Prominent among them (and invidious to so name) were Thomas Keane, Bernard Tracy and Peter Hilgers, a German recruited with several others, by Archbishop Eyre for the Scottish Mission. Michael Teehan, the first parish priest of the new era (post 1960) deserves a special mention as founder of the new Saint John the Evangelist Church. No doubt one of the saddest events in Saint John the Evangelist's history must be the destruction by fire of the old Gothic Saint John the Evangelist Church in 1941, not by enemy action but by an electrical fault: a short circuit and a terrifying blaze. Many today (2004) can still recall the shock; Canon Troy, parish priest, was affected thereafter.

For twenty years, the parish hall and Tower Rais served as makeshift churches, until, in 1961, the present fine building was dedicated by Bishop James Black, first bishop of the diocese of Paisley. The lives of the pastors of Saint John the Evangelist are recorded in the archives. The lives of their people are not. Their piety, devotion and heroism are much more difficult to assess. Changes in society form much of the background against which parochial changes can be assessed. Catholic Emancipation, educational changes – with their opportunities for social and economic advancement; the spread of political power through Parliamentary Reforms; the increasing industrialisation of working life; the slow improvement in housing and public health all left their positive imprint on the lives of Barrhead Catholics as of the Scottish people in the 19th Century. Unemployment and the slow decline of long established industries; the two world wars; recession and changes in social habits that destabilised family life – the televisual revolution and all its consequences – all these and other factors, affected ordinary people in extraordinary ways; not least in Barrhead. 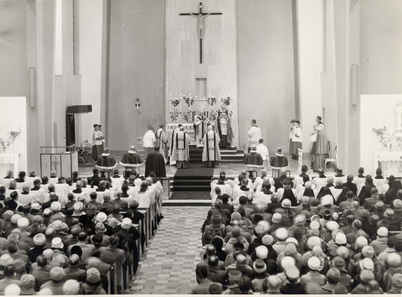 Consecration of the new Church, 1961
But, perhaps, the Devotional Revolution that affected most of Christian Europe – Catholic and Protestant – and in particular post-Famine Ireland fostered the piety generated by the Oxford Converts and by the missionary efforts of Bishops, clergy, religious educators, and Catholic laity. And yet, in the 21st Century, Saint John the Evangelist retains many of its old style customs and habits; a sign of the corporate tradition inherited from its long past. Hymns (now a main feature of parish piety) no longer printed in hymn books or sung anywhere else are still popular in their 19th Century format.

But with the setting up of a Parish Council and the commissioning of many Extraordinary Ministers of the Eucharist, with Lay Readers at Mass it is clear that lay participation in parish life has become a closer and more involved reality. Things surely will not be so bad if the devotional life of the parish continues to sponsor such manifestations of piety as the Perpetual Adoration in the Oratory. The daily morning Rosary, visitation of the sick by Extraordinary Ministers, the continuing work in schools and the Rite of Christian Initiation of Adults (RCIA) all reflect a living awareness and spiritual vitality. Efforts to preserve, to maintain, to restore the fabric of the church, with the continuous generosity of the parish to the charities that demand the willing generosity of its parishioners betokens a living Christian awareness in the parish of Saint John the Evangelist .
Notes

i. While Scotland was under the jurisdiction of the Congregation of Propaganda Fide (c. 1650–1908+) the office of parish priest (Parochus) was not officially in place. The Vicars Apostolic appointed priests as Rectors of Missions. The Rector of Saint John the Evangelist could be, and on occasion was, abruptly re-assigned by the Vicar-apostolic, and after 1878 by the bishop of the diocese, who in Saint John the Evangelist's case was the archbishop of Glasgow. Archbishop Eyre appointed chosen priests to be known officially as Mission Rector, (M.R.). With the Codification of Canon Law in the 20th Century full church administration was restored; and the Canonical status of Parish Priest.

ii. The form of address (esp. pre-1878) to and of a Scottish priest was Mr, a courtesy title awarded to a University graduate or Master. Priests of a religious Order (e.g. Jesuits) and Irish priests were addressed as Father, the present custom.

A brief history of Saint John the Evangelist, Barrhead, written and contributed by George Dorrian of this parish.